The Beginning is the pilot of Kids World's Adventures of Kids Incorporated, focusing on how the band began by TheCartoonMan12 and Jimmyandfriends. The pilot was originally produced on YouTube and Google Drive, but was never aired in its original form (it was eventually released on video in 1985; though with additional footage featuring the addition of Rahsaan Patterson as the Kid).

We are first introduced to the Kid ("that's not my real name, but that's what everyone calls me") explaning what happened when he first moved to the neighborhood. We then see Gloria practicing the piano before Renee sneaks in and convinces her to follow (armed with a tape recorder) her to the Malt Shop for band auditions; setting up the Men at Work medley followed by the Police medley.

Gloria then complains about Renee's plot to get her to sing, especially when Renee suggests singing with Mickey's band, "Kids Incorporated". At the Malt Shop; we meet a sarcastic soda jerk named Mike while several other kids get ready. First is a girl named Jennifer performing a medley of Olivia Newton-John songs before Danny (accompanying Jennifer on keyboards) performs a Hall & Oates medley. Danny is apparently also the object of Gloria's affections but is going with Jennifer. Meanwhile, Renee's sister Stacy joins Renee and Gloria at their table, and when asked where Mickey is, agrees to tell provided she tags along.

Not surprisingly, Mickey decides not to let the girls join. His band then sneaks into a boarded up building once known as the Palace that once was a place where performers such as Frank Sinatra and Elvis Presley played at, leading up to "Defunkitize". The band then bolts just as the girls arrive, preparing to confront Mickey. The girls then manage to taunt one of the other band members before walking up to the Coco Club building ("Elvis Presley Medley"). However, the girls then begin arguing among themselves, sparking Stacy performing "Gloria". The girls then stumble across Kids Incorporated, performing a Stray Cats medley before Renee and some other girls call him out ("Mickey"), launching into a performance of "Kids in America". Mickey attempts to take a diplomatic approach when confronted on why the band didn't allow girls in, stating that so close to the tryouts no one could be added, only for Chris to blow the cover by adding "Especially girls" before heading to the garage to practice. Meanwhile, the Kid (watching from a distance) laments how shy he way ("You're So Shy"). Meanwhile, back at the Garage, Kids Incorporated rehearses with a Beatles medley.

The next day, the Kid walks out but was indecisive over whether to audition. At the Malt Shop, Mike offers to "help" Gloria win, first by outright rigging the results, then attempting a bribe by asking her out. As soon as this ends, we see T.J. perform a Michael Jackson medley. Then Kids Incorporated takes the stage at the last minute (just as Mike was getting ready to close down); performing "Jessie's Girl" before Gloria joins them with "Heartbreaker"; turning their time on stage into a Rick Springfield/Pat Benatar vocal duel. The gambit works, as Kids Inc. (along with Gloria) are declared the winner; leading to the Kids Incorporated theme. Gloria then races back home, where the tape of her playing piano is still playing.

Back in the present, the Kid is wondering what could have been, lamenting how his shyness kept him from possibly winning and joining Kids Incorporated ("Holding Out for a Hero"), unaware Gloria had walked up. She then explains some of the guys had moved away and there was an opening, which he gladly accepts.

The video ends with a reprise of the full theme with a montage of Season 1 clips and Kid explaining the value of believing in yourself.

Note: Many of the songs are performed as medleys of hit songs by various artists. Also, it should be noted that most of the songs were performed by actors that did not appear on the show when it was picked up in 1984.

In addition to the scenes featuring the Kid being added later; some of the other significant differences include the following: 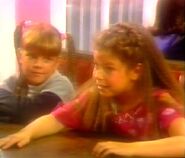 Add a photo to this gallery
Retrieved from "https://parody.fandom.com/wiki/%22Kids_Incorporated_(The_Beginning)%22?oldid=1317067"
Community content is available under CC-BY-SA unless otherwise noted.