1 is the fearful, arrogant portion of the Scientist's personality. He is the self-appointed leader of the group, demanding absolute loyalty from the others and frequently clashing with 9, who refuses to follow him. He is seen to be quite rude, lacking guilt for his actions when the others do not do as he is asked. When the Scientist first gave life to 1, he immediately began struggling in the Scientist's hand and walked away defiantly. The Scientist notes that his stubborness is needed to survive in this world. He wonders if 1 will make a good leader or not. 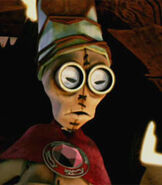 Add a photo to this gallery
Retrieved from "https://parody.fandom.com/wiki/1_(character)?oldid=2150207"
Community content is available under CC-BY-SA unless otherwise noted.