Six, is the sixth sibling of her family, she is the ballerina of the group, and she says she is the most beautiful monster. She speaks with a Brooklyn accent. 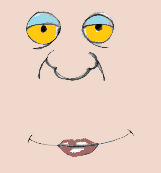 Six's butt (x5)
Add a photo to this gallery

Six as the Hippopotamus

Hippo Six Matting with One

Sitting
Add a photo to this gallery
Retrieved from "https://parody.fandom.com/wiki/6_(7_Little_Monsters)?oldid=2540941"
Community content is available under CC-BY-SA unless otherwise noted.