The Parody Wiki
Register
Don't have an account?
Sign In
Advertisement
in: Characters, Turning Red Characters, Female Characters,
and 15 more

Abby Park is a character in Disney•Pixar's 2022 animated feature film, Turning Red. She is one of Mei's best friends.

Not much is known about Abby at the moment, other than the fact that she's a fun loving, chaotic preteen who is very supportive of her friends. She can also be quite aggressive, as she confidently punches Mei when she requested for it.

Abby is a short, heavyset, Korean-Canadian preteen with fair skin, brown eyes with the bright purple eyeshadow, and long, straight, black hair that forms into a brown ombre. She wears a glittery purplish-pink headband, orange heart earrings, a purplish-pink sweater with purple overalls that feature different colored (mostly in the palette of dark pink and orange) flowers on it. She also has the word "cool" in hot pink stitch on one leg above the flower, and a smiley face on the other. She also wears white socks and auburn shoes, while she has a lavender watch on her right arm and a rainbow friendship bracelet on her left. 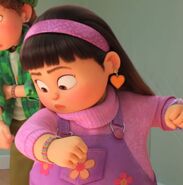 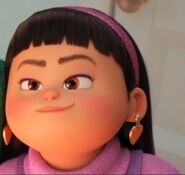 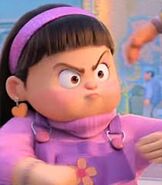 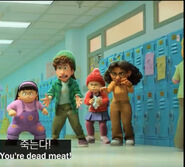