Ace Fender Bender is the handiest resident in all of Lalaloopsy Land! He's a cool operator who sometimes has a short fuse. He loves taking things apart, but not putting them back together. His name is based off of his exceptional skill when it comes to his craft, as well as fender bender collisions which occur when cars hit each other!

Ace is a fair skinned boy with black eyes and carnation pink cheeks. He has short, spiked neon orange colored hair with messy bangs framing his head and few spikes of hair that stick up. Across the bridge of his nose (if he had one) are light freckles.

He wears a denim outfit over a white T-shirt. At the neck and cuffs of his pants is an indigo blue segment with tiny indigo blue polka dots and clasps. Due to his career, Ace can often be found with few grease stains along his pants, so in his left pocket he carries a scarlet red cloth. Ace also has white socks and a pair of scarlet red sneakers.

Ace Fender Bender has a chocolate brown monkey with plain black eyes and small carnation pink cheeks. She has a small curl of hair worn up with a scarlet red bow.

Ace's house resembles a mechanical shop. He uses it to make new inventions and do repairs.

As seen in the Lalaloopsy TV Series 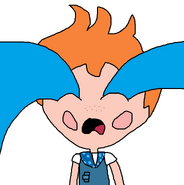 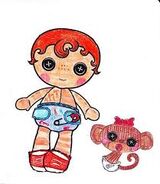 Add a photo to this gallery
Retrieved from "https://parody.fandom.com/wiki/Ace_Fender_Bender?oldid=2412326"
Community content is available under CC-BY-SA unless otherwise noted.