Action Hank is a heroic crime fighter and a television action hero. He is essentially a parody of several popular action shows/movies or action stars from the 70's and 80's, all rolled up into one. These include: Chuck Norris, Mr. T, G.I. Joe, Shaft and Rambo. Along with Major Glory and Albert Einstein, he is idolized by Dexter. 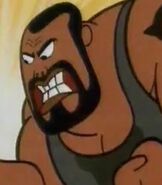 Add a photo to this gallery
Retrieved from "https://parody.fandom.com/wiki/Action_Hank?oldid=793239"
Community content is available under CC-BY-SA unless otherwise noted.