The Parody Wiki
Register
Don't have an account?
Sign In
Advertisement
in: Characters, My Little Pony Characters, Villains,
and 37 more

Adagio Dazzle is a female siren and the main antagonist of "My Little Pony Equestria Girls: Rainbow Rocks". She is the lead singer of her band The Dazzlings, rivaling the Rainbooms. She is also the daughter of Eris and Pitch Black, and is seen as the Queen of Heylin Empire, along with Venom (son of Chase Young and Wuya) as the King of Heylin Empire, as the main antagonist of Twilight and Kyle's Adventure Team Series, being most hated enemy to Team Rainboom and Team Owl.

Adagio Dazzle played one, and two of the Fates in Rainbowcules Dash (Twilight'sSpaceStar17's Style)

She is a fate

She is the empress

She is the sea witch

Adagio Dazzle (with Boogeyman) played Scar in The Team-Owl King

She is an evil lion

She is a devil and ruler of the underworld

Adagio Dazzle played Trevor in SunBob ShimmerPants What Ever Happened to Sunset Shimmer? 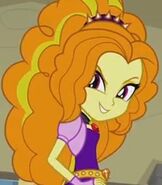 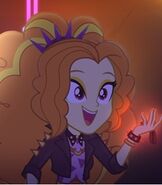 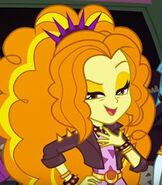 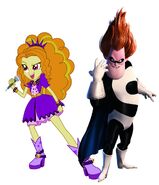