Adocus is an extinct genus of aquatic turtles belonging to the family Adocidae. Adocus was once onsidered a genus belonging to the family Dermatemyidae. Species of the genus Adocus had flattened and smoothly contoured shells with horny sculptured plates. The shells could reach a length of about 80 cm. These large freshwater turtles had an omnivorous diet. They lived from the Late Cretaceous to the Paleocene in North America, but in Asia, they were also present during the Oligocene. These turtles have been found in Cretaceous to Paleocene of United States and in the Cretaceous of Kazakhstan, Tajikistan , the United States, and Uzbekistan. 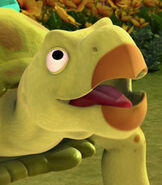