Number 12, D22, or Young Adult Dexter is Dexter in the future as a young adult. He is a complete slave to Mandark and works in a cubicle as a low-rez worker. Mandark is very mean and abusive to him and he is always getting harshly and severely punished for doing even a little wrong, such as "almost being late". These punishments are usually carried out through such means as "public flogging", or, in layman's terms, being brutally whipped with what appears to be a whiplike laser. It can be inferred that such events are more than likely what led to the drastic shift in character from Dexter to Number 12. In fact, through such brutality along with Mandark seemingly ruling the world, he seems to have forgotten how he acted as a child, stating, without hesitation, "Oh, I've always been like this." 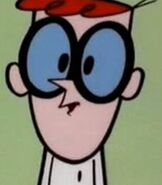