The Parody Wiki
Register
Don't have an account?
Sign In
Advertisement
in: Characters, Animals, African Animals,
and 17 more

The African golden wolf (Canis lupaster or Canis anthus), also known as the African wolf or thoa, and formerly a subspecies of golden jackal called the Serengeti jackal (Canis aureus bea) is a canid native to north and northeastern Africa. The species is common in north-west and north-east Africa, occurring from Senegal to Egypt in the east, in a range including Morocco, Algeria, and Libya in the north to Nigeria, Chad and Tanzania in the south. It is a desert-adapted canid, and is common in plains and steppe areas, including ones lacking abundant water. In the Atlas Mountains, the species has been sighted in elevations as high as 1,800 metres. It is primarily a predator, targeting invertebrates and mammals as large as gazelle fawns, though larger animals are sometimes taken. Other foodstuffs include animal carcasses, human refuse, and fruit. The African wolf is a monogamous and territorial animal, whose social structure includes yearling offspring remaining with the family to assist in raising their parents' younger pups. 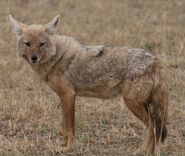