The most conspicuous characteristic of these birds (Actophilornis africana) are their huge, grey feet and claws which enable them to walk on floating vegetation, especially lily pads. They are also very good swimmers and divers. The African jacana has a chestnut body, and its neck and head are white in front and black in back, with a golden yellow breast. The African Jacana has a bright blue frontal shield, which is a bare, fleshy area that extends from the bill to as far as the top of the head. The sexes look alike, but the female is a bit larger than the male. African jacanas moult all their flight-feathers simultaneously and are flightless during this period. The African jacana is not migratory, but extremely nomadic, often in connection with changing waterlevels; in wet years, birds may show up on pans, from which the species has been absent for several years. The African jacana mainly feeds on insects and worms, but also other arthropods, including spiders and crustaceans, and molluscs. Seeds are sometimes taken. Foraging similar to the Wattled jacana, though the species may also catch flies and other flying insects. 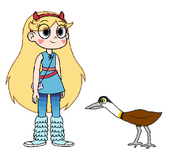 Retrieved from "https://parody.fandom.com/wiki/African_Jacana?oldid=2045138"
Community content is available under CC-BY-SA unless otherwise noted.