Start a Wiki
Agent Olympia is the main character in Season 2 of Odd Squad. Her partner is Agent Otis. She is played by Anna Cathcart.

Olympia is an 11-year-old recent grad from Odd Squad Academy. Smart, perky, and easily excitable, but never annoying, Olympia is a fangirl who is passionate about Odd Squad and loves to come to work each day. Open and friendly, Olympia will tell you her life story as soon as you meet her, whether you want to hear it or not. Olympia is a die-hard optimist and believes in everyone and everything. She loves Odd Squad history and is a huge fan of Olive and Otto.

Olympia is very energetic and friendly. She loves working, but she also enjoys having fun and usually has an optimistic outlook on life. She loves to help others and whenever she sees that someone is upset, she does her best to cheer them up. She has the habit of acting like a workaholic, she treats her job seriously and with dignity, but also an obsession. She is also very organized and somewhat disgusted by disorganization. 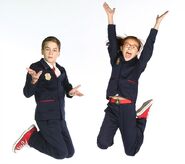 Add a photo to this gallery
Retrieved from "https://parody.fandom.com/wiki/Agent_Olympia?oldid=1819844"
Community content is available under CC-BY-SA unless otherwise noted.