The agile gibbon (Hylobates agilis), also known as the black-handed gibbon, is an Old World primate in the gibbon family. It is found in Indonesia on the island of Sumatra, Malaysia, and southern Thailand. The species is listed as endangered on the IUCN Red List due to habitat destruction and the pet trade. The agile gibbon has fur varying in color from black to red-brown. Its brow is white, and the male can be recognized by its white or light-grey cheeks. Additionally, the male is slightly larger than the female. The agile gibbon weighs from 4 to 6 kg (8.8 to 13.2 lb) with an average of 5 kg (11 lb), though in captivity it can reach 8 kg (18 lb). It has a head and body length of 44–63.5 cm (17.3–25.0 in). Like all gibbons, it is tailless. 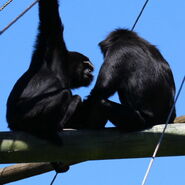 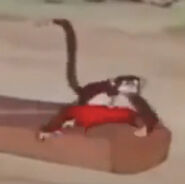