Ahsoka Tano is a character who first appeared as the deuteragonist in the 2008 animated feature film Star Wars: The Clone Wars, as the tritagonist in its following TV series from 2008-14, and a supporting character in Star Wars Rebels. She is Anakin Skywalker's former apprentice, and an ally of Kanan Jarrus' rebel cell. 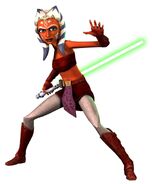 Add a photo to this gallery
Retrieved from "https://parody.fandom.com/wiki/Ahsoka_Tano?oldid=2340013"
Community content is available under CC-BY-SA unless otherwise noted.