The Parody Wiki
Register
Don't have an account?
Sign In
Advertisement
in: Married with Children Characters, Bundys, Main Characters,
and 76 more

Al Bundy (played by Ed O' Neill) is the husband of ''Peggy Bundy,'' father of ''Kelly and Bud Bundy,'' and long term women's shoe salesman at Gary's Shoes. Al has been known to frequently tell tales of his high school football days, most notably the time he scored four touchdowns in a single game for the 1966 Chicago All City Championship Game; and blaming the outcome of his life on his wife and the Bundy Curse...

Al Bundy was born on November 7, 1948 in Chicago, Illinois to an unnamed mother and unnamed father. But in "The Poker Game", she said Al was born on the 23rd (though she didn't literally specify the actual month). Some sources also stated that Eugene Bundy is Al's brother, as Bud addressed him as "Uncle Eugene.'' as he was also taken back to prison in "And Baby Makes Money". But for the most part, Al has not mentioned his siblings, instead talking about his parents, uncles, aunts, and cousins.

As the series went on, Al would say how his childhood was very ideal, and exciting unlike now as he would actually eat dinner. As a child, the highlight of Thanksgiving was riding along with his parents, who were drunk off of Wild Turkey bourbon, to buy a sweet potato pie from Aunt Maddie's bakery, and then consuming the entire pie for himself as his parents slept the booze off.

As a child, Al had frequented a library but rarely returned books on time, and constantly battled the librarian, Miss DeGroot who belittled him as much as he did her. To try and teach him a lesson, Miss DeGroot agreed to let Al check out one more book, specifically, The Little Engine that Could, which Al in turn, held onto for thirty years before he attempted to return the book unnoticed to avoid paying fines.

He attended James K. Polk High School in the 1960s and was considered a top athlete, playing fullback for the football team, Polk High Panthers and earning the nickname "Touchdown Bundy". His jersey number was 33. His greatest achievement in high school was scoring four touchdowns in a single game against Andrew Johnson High at the High School City Championship in 1966. He also scored the most touchdowns in one season for the team, making him the MVP that same year. He boasted to Aaron Mitchell that he never played halftime, as the team would be too far ahead whenever he played. [41]. It is mentioned that at one game, Al knocked out the coach after he suggested they quit for being behind by 3 touchdowns, with Al telling his team that he is not a quitter and to give him the ball and get out of his way.

In "Al... with Kelly", he mentions that he was offered scholarships by various junior colleges and would have made something of his life if he did go, but Peg screwed his opportunity. In the episode, "Scared Single", its revealed that he had drilled four holes into the girl's locker room and joked that he didn't even think women had heads for years. In the same episode, he reveals that he actually had a scholarship to play college football, but broke his leg after being tackled. In Al Goes Deep, he confirms the story about a tackle ending his football career, adding that it was Peggy's fault as she had distracted him during the game by shouting at him, even though he had told her not to do it anymore numerous times. In "The Proposition", he mentions that he would have gone professional but ended up with "...a bum knee and an even bummer wife.''

Al often gives the appearance and the opinion that he cannot stand his family, often making degrading and insulting remarks to them, and threatening physical violence against his wife, Peggy Bundy and his son, Bud Bundy. It has been proven however, on many occasions that he does in fact love and care for his family, and will at times intentionally sacrifice his chance at happiness and success for them. He always had a million chances to leave them but he never follow through on it. 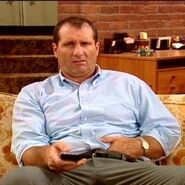 The Bulls are Playing! 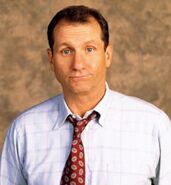 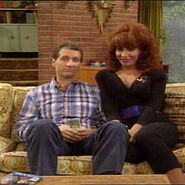 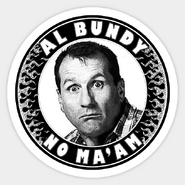