Alain (Japanese: アラン Alan) is a recurring character in the Pokémon anime. He is a Pokémon Trainer seeking to defeat all Mega-Evolved Pokémon using his Mega Charizard X. He initially appears as the main character of the Mega Evolution Special side-series beginning with Mega Evolution Special I working under Lysander's instruction to collect Mega Evolution energy. He later appears in the XY&Z arc of the XY series as a rival to Ash. 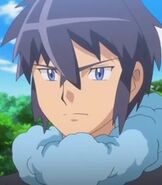 Add a photo to this gallery
Retrieved from "https://parody.fandom.com/wiki/Alain?oldid=917772"
Community content is available under CC-BY-SA unless otherwise noted.