The Parody Wiki
Register
Don't have an account?
Sign In
Advertisement
in: TRON-Universe, Main Characters, Male,
and 54 more

Dr. Alan T. Bradley, known as simply Alan Bradley, (known to Tron and to Ma3a as Alan-One and to Mercury as Guest) is a computer programmer who wrote the computer program TRON. He has also operated as CEO of ENCOM in Kevin Flynn's absence, and later withdrew to the role of Executive Consultant while still working on Space Paranoids Online. With the unexpected disappearance of Flynn, Alan has also taken on guardianship of Flynn's son Sam for several years, although attempts to groom the young man to rise to his father's legacy have proven unsuccessful. Nevertheless, Alan still holds out hope that one day the younger Flynn will make something of himself and continues to maintain contact with him.

Alan Bradley was a programmer at ENCOM in 1982 when he wrote the Tron program. Tron was designed to monitor ENCOM's computer network from both external and internal threats. As such, Tron became a threat to the ENCOM mainframe's Master Control Program, which had become self-aware and had developed aspirations of global conquest.

Alan was then unexpectedly denied access to Tron, as part of a security lockdown measure by the MCP, when former ENCOM programmer Kevin Flynn tried to hack into ENCOM's mainframe. His girlfriend Lora uncovered the identity of the hacker and the pair went to visit Flynn's Arcade to see if Flynn really did break in. Once there, Flynn admitted the intrusion and continued to relate the story of ENCOM Senior Executive Ed Dillinger claiming credit for Flynn's work, effectively misappropriating the software. Bradley, realizing that he could regain access to Tron by helping to shut down the MCP, agreed to help Flynn break in again.

With the help of Alan and Lora, Flynn gained access to Lora's work terminal, but was eventually discovered by the MCP. The MCP had him digitized into a vast digital world inside the ENCOM mainframe where he met Alan's security program, Tron.

Tron proceeded to aid Flynn further against the MCP from within the system, and eventually managed to make contact with Alan. Once Alan returned information to Tron on how to destroy the MCP, Tron and Flynn were able to defeat the Master Control Program together. With evidence of Dillinger's wrongdoings extracted from the demise of the MCP, Dillenger was exposed and was fired from ENCOM. Flynn returned as CEO and Alan gained the position of COO.

In TRON 2.0, Alan Bradley was widowed, his wife, Lora, having been killed in an unspecified accident that may have involved the digitizing technology. Alan and Lora had one child, Jethro, before Lora was killed.

A rival company, fCon, bought out ENCOM with plans to use the digitizing process to invade the Game Grid. The MCP of 20 years ago, held the secrets of the original process and with its destruction the algorithms were lost. Alan had been working to restore the process, finally, meeting success with the help of his new AI assistant program, Ma3a.

Alan was kidnapped by the main fCon antagonists, when he refused to hand over the correction algorithms to the digitizing process. Ma3a used the digitizing laser on Jet, since he would be much more able to help his father and stop fCon from inside. Once again, Alan took a back seat during most of the storyline, only contacting his son to provide pertinent information and move the plot line forward. Using the modem in an old arcade cabinet, Alan maintained contact with his son using the moniker of "GUEST".

Eventually, the fCon villains forcibly digitized Alan into a dangerous, virus-ridden computer for his meddling and lack of cooperation. Alan and Jet worked together from this point; father as the brains, and son as the brawn. Alan transported back into the real world at the conclusion of the game.

The Ghost in the Machine

In TRON: The Ghost in the Machine, six months after the FCon incident in the computer world, Jet quit his job as a programmer at ENCOM. Alan tried repeatedly to get him to return, reminding him that it was his dream to become a programmer, but Jet refused. Alan then suggested that his son visit the psychiatrist that had once helped Flynn. Later that night he noticed a strange subroutine in the system and received a message. When he pressed the button, the voice of his dead wife spoke to him over the intercom.

He called Jet, but their conversation abruptly ended. Jet later discovered that he was wanted for the murder of his father, whom he supposedly shot in his office. After an ordeal in the computer world, Alan's death was revealed to have been a part of a hallucination experienced by Jet.exe, a backup program of Jet in the computer world.

In TRON: Legacy, Alan Bradley had acted as the CEO of ENCOM, appointed following Kevin Flynn's disappearance. After Flynn's disappearance in 1989, Alan continued at ENCOM to protect the company and married Dr. Lora Baines, as well as act as a surrogate father towards Kevin's son Sam. However, with Kevin gone, Alan's efforts to keep ENCOM focused on Flynn's altruistic designs were in vain against the increasingly profit-driven board members. In the meantime, his program Tron was abducted within the Tron system and repurposed to become Rinzler, a malicious doppelganger of Alan himself.

In 2010, Alan received a call on his pager from a number at Flynn's Arcade that had been disconnected for over twenty years. Alan informed Sam of this after the young man's annual prank on ENCOM that involved leaking the twelfth generation operating system on the Internet. Sam was disinterested, until Alan told him that before his father disappeared, he was talking about making a big change, involving science, medicine and religion. Sam then went to the arcade to investigate. It was there that he accidentally discovered the Tron system and the reasons why his father had vanished.

After returning to the real world, Sam paged Alan and requested he start work at ENCOM on Monday, and as the controlling interest shareholder of ENCOM, he would name Alan chairman of the board.

TRON: The Next Day

Subsequent to the free digital distribution of ENCOM's latest version of their operating system in December 2010, ENCOM enlisted the aid of the U.S. Justice Department in tracking down the elusive Flynn Lives Organization. Flynn Lives' central figure Roy Kleinberg was in the process of destroying years of accumulated data on ENCOM, when Alan walked in and interrupted him.

Alan, who had secretly funded the operation since its earliest beginnings, assured his friend that with Sam Flynn's rise to the leadership role within ENCOM, they no longer had anything to fear from the company. They also had little reason to continue with the agenda of Flynn Lives, and after offering Kleinberg a position in ENCOM, he and Kleinberg turned their backs on Flynn Lives and left. 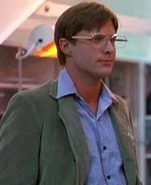