The Parody Wiki
Register
Don't have an account?
Sign In
Advertisement
in: Orphans, Kids, Pixar Characters,
and 20 more

Alberto Scorfano is the deuteragonist of the 2021 Disney/Pixar animated feature film, Luca.

Alberto Scorfano is an independent, free-spirited 14-year-old sea monster with unbridled enthusiasm for the human world. Expressive and gregarious, he is all about having fun, so inviting a fellow sea monster to hang out above the surface is a no-brainer for Alberto. Besides, Luca is the perfect audience for Alberto’s vast – albeit questionable – knowledge of all things human.

In sea monster form, Alberto has periwinkle scales and purple "hair". His eyes are still green, but they have yellow sclera and oval shaped pupils. He also has a long tail with purple caudal fins.

In human form, Alberto has tan skin with freckles, green eyes, and brown curly hair. He wears a yellow tank top with brown shorts and is barefoot all the time, like Luca. 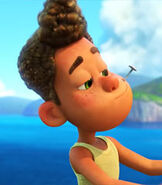 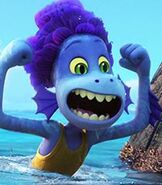 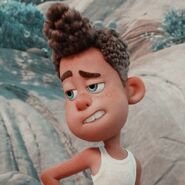 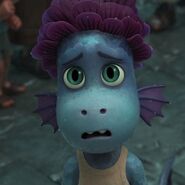