Albertosaurus is a genus of tyrannosaurid theropod dinosaurs that lived in western North America during the Late Cretaceous Period, about 70 million years ago. The type species, A. sarcophagus, was apparently restricted in range to the modern-day Canadian province of Alberta, after which the genus is named. Scientists disagree on the content of the genus, with some recognizing Gorgosaurus libratus as a second species. 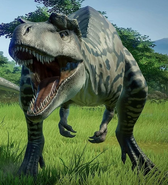 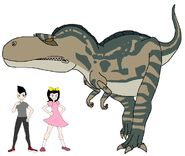 Retrieved from "https://parody.fandom.com/wiki/Albertosaurus?oldid=2402148"
Community content is available under CC-BY-SA unless otherwise noted.