Alex Davis (Japanese: ノボル Noboru) is a Pokémon Trainer and a one-time character who appeared in Power Play!. Announcing himself as "Alex Davis from Cherrygrove City", he challenged Gary Oak to a Pokémon battle using his Alakazam. However, Gary was able to defeat Alex without much trouble. Ash, Misty, and Brock, who just walked nearby, saw the battle, leading to another encounter between Ash and his rival. 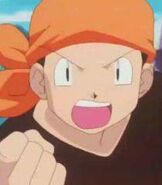 Add a photo to this gallery
Retrieved from "https://parody.fandom.com/wiki/Alex_Davis?oldid=883033"
Community content is available under CC-BY-SA unless otherwise noted.