Bio: Well-recognized by that trademark cowlick and freckles, Alfalfa Switzer is full on pride, self-assurance and self-esteem with quite a little eye for the ladies; the only thing that can knock him back to reality is Butch, who often makes him the victim of many cruel pranks and threats. Some of these embarrassments though are the results of efforts from his friends trying to do what's right for him or just trying to knock his ego down to level. Possibly the most dimensional character in the series, he is the best friend of Spanky, a leader and role model for Porky and Buckwheat and the number one pursuer of love from Darla. It is for all these reasons that he possibly stands out as the most famous "Little Rascal" of them all, second only to Spanky himself.
When we first meet Alfalfa, he and his brother, Harold, sometimes nicknamed "Slim" or "Deadpan," are performing on stage at a talent show in Beginner's Luck singing "She'll Be Coming Around The Mountain" but here, they are named Tom and Jerry. Whatever the names, Alfalfa must have met Spanky behind the scenes and saw something in him that he liked, because they are nothing but buddies from now on, even with the light skirmish here and there. He, Spanky, Porky and Buckwheat even briefly form a singing group without Harold called The Four Nitengales (their spelling) in Night 'N' Gales. Alfalfa briefly explores the luxuries of opera in Our Gang Follies Of 1938, but he is always singing or at times crooning in Spanky's cellar shows.
Not much is seen in Alfalfa's home life. He has two baby brothers, but with his looks, he can't understand why they look the way they do in Roamin' Holiday. His Aunt Penelope is a sculptress and then a writer in Alfalfa's Auntand her son Cousin Wilbur even once pay a visit. He discovers a wealthy look-alike named Cornelius in Alfalfa's Double and switches places with him, only to find that his normal life is not so bad.
The one true love of Alfalfa's life even over his joy of singing for others is Darla, even if he once replaces her on the radio in The Pinch Singer. However, his own ego has gotten him in trouble at times; she is not above using Waldo or even Butch to make him jealous. On one occasion, Alfalfa even goes after Marianne, the daughter of the new truancy officer in Sprucin' Up and takes a girl named Muggsy to the movies in The Little Ranger, but in his heart, Darla is the one for him.
Other than singing, Alfalfa takes time out for football, a little golf in Divot Diggers and even wrestling in Came The Brawn. He likes to play detective in Hide And Shriek, using a Sherlock Holmes novel as his guide. He also sometimes forgets to comb his hair, identifying Tarzan in Sprucin' Up as his role model. Like every young boy, he would much rather skip school and play hooky to go fishing or to the circus, but ironically, he's very spiritual, warning Spanky against the evils of skipping church to go fishing in Little Sinner. He also has a vivid imagination; he dreams himself into the future at Club Spanky and as a cowboy hero in The Little Ranger.
Alfalfa loses his tonsils in Men In Fright, causing him to miss a little school. He attends Greenpoint Grammar School and Dover Military Academy for a brief time, intending to come back a football hero in The Pigskin Palooka for his friends, but despite the lies and bravado, his friends and a universe of luck somehow make it come true. Quotes:

Alfalfa As Seen In Other Media 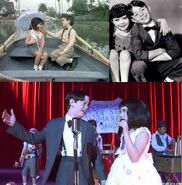 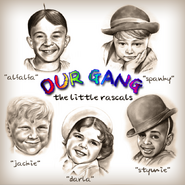 Add a photo to this gallery
Retrieved from "https://parody.fandom.com/wiki/Alfalfa_Switzer?oldid=1696208"
Community content is available under CC-BY-SA unless otherwise noted.