Alice is one of Gordon's old friends from the GNR/newly formed LNER and now works on the NWR. She's a fan character created by Wildnorwester.

Alice was built in 1904 at Doncaster Works for the Great Northern Railway. She first met Gordon in 1920 before he went to Sodor. After her withdrawn from service in the 1950s, she was preserved by the Great Northern Railway Preservation Society led by a man named Dave Matthews. Her assistant to the man was Adam, the Vice-President of the GNRPS. She first met Gordon at London's Kings Cross after so many years. However, there was financial difficulty with the management of the GNRPS, but with the help of Adam and Dave Matthews they managed to get Gordon to take her back to the island, where she stays. 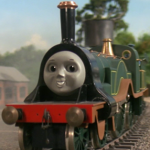