Alyson Malitski is sweet and pretty, the typical girl-next-door-type. She had been a friend of Nina's for a long time. Alyson's firefighter father had once rescued Connor from a fire at LifeCycles, one of the most popular places in Elkford, and she instantly took a liking to him, and the feeling became mutual.

She will play Chloe Flan in an upcoming Sabrina: The Animated Series parody

She will play Stevie Budd in an upcoming Schitt's Creek parody 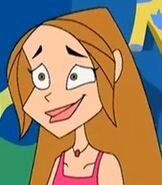 Add a photo to this gallery
Retrieved from "https://parody.fandom.com/wiki/Alyson_Malitski?oldid=2487520"
Community content is available under CC-BY-SA unless otherwise noted.