The Parody Wiki
Register
Don't have an account?
Sign In
Advertisement
in: Characters, Animals, Snakes,
and 7 more

The Amazon Tree Boa (Corallus hortulana) is a non-venomous boa species found in South America. No subspecies are currently recognized. These animals are notorious for being very aggressive, although the extent of such varies. These snakes also have very long needle-like teeth, which makes their bite quite painful. However, these snakes tend to give some warning of being inclined to bite, and will usually give fairly gentle bites (which can still draw blood) unless they are given reason to give a full strike. An aggravated tree boa might whip its tail and release a foul smelling liquid, commonly referred to as "musk", that is difficult to remove. This is a similar tactic seen in different animals from skunks to insects. 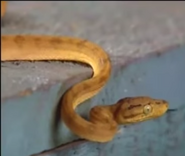