The most aquatic, abundant and widely distributed rail in North America, the American coot (Fulica americana) is one of the continent’s most familiar wetland birds. An instantly recognisable species, colourful yellow to orange legs and feet, and a bright white, triangular-shaped bill, contrast starkly with the largely all-black plumage. The male and female are indistinguishable except for size, with the male usually slightly larger, and call, with the male and female uttering slightly different variations of grunts, squawks and croaks. The juvenile, however, has a bald red head and goes though an immature plumage of dull grey, with a lighter face and chest, before taking on the colouration of the adult. The American coot propels itself at the water’s surface with repeated forward and backward pumps of the head, and while submerged, this accomplished swimmer and diver uses its lobed toes to skilfully manoeuvre its body to forage for aquatic plants. On land and in the air, however, it is more awkward. It walks with an ungainly waddle, all the while flicking the cocked tail, exposing the white undersides, and to take to the air, this clumsy flier requires long running takeoffs, and usually flies low over water with the head, neck and legs outstretched. 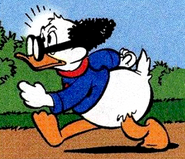