The American crocodile (Crocodylus acutus) is considered an endangered species in nearly all parts of its North, Central, and South American range. Survey data, except in the United States, is poor or nonexistent, but conservationists agree that illegal hunting and habitat depletion has reduced populations of this wide-ranging reptile to critical levels. 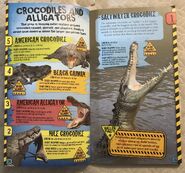 Add a photo to this gallery
Retrieved from "https://parody.fandom.com/wiki/American_Crocodile?oldid=2222459"
Community content is available under CC-BY-SA unless otherwise noted.