The American pika (Ochotona princeps), a diurnal species of pika, is found in the mountains of western North America, usually in boulder fields at or above the tree line. They are herbivorous, smaller relatives of rabbits and hares. American pikas, known in the 19th century as "little Chief hares", have a small, round, ovate body. Their body lengths range from 162 to 216 mm (6.4 to 8.5 in). Their hind feet range from 25 to 35 mm (1–1½ in). They usually weigh about 170 g (6.0 oz). Body size can vary among populations. In populations with sexual dimorphism, males are slightly larger than females. The American pika is intermediate in size among pikas. The hind legs of the pika do not seem to be much longer than its front legs and its hind feet are relatively short when compared to most other lagomorphs. It has densely furred soles on its feet except for black pads at the ends of the toes. The ears are moderately large and suborbicular, and are hairy on both surfaces, normally dark with white margins. The pika's "buried" tail is longer relative to body size compared to other lagomorphs. It has a slightly rounded skull with a broad and flat preorbital region. The fur color of the pika is the same for both sexes, but varies by subspecies and season. The dorsal fur of the pika ranges from grayish to cinnamon-brown, often colored with tawny or ochraceous hues, during the summer. During winter, the fur becomes grayer and longer. The dense underfur is usually slate gray- or lead-colored. It also has whitish ventral fur. Males are called bucks and females are called does like rabbits. The American pika can be found throughout the mountains of western North America, from central British Columbia and Alberta in Canada to the US states of Oregon, Washington, Idaho, Montana, Wyoming, Colorado, Utah, Nevada, California, and New Mexico. Of the 30 existing species of pika, it is one of only two which inhabit North America, along with the collared pika (O. collaris). In relation to the distribution of the American pika, the collared pika is located farther north of those regions and is separated by a gap of about 500 miles (800 km) extending across British Columbia and Alberta. Pikas inhabit talus fields that are fringed by suitable vegetation on alpine areas. They also live in piles of broken rock. Sometimes, they live in man-made substrate such as mine tailings and piles of scrap lumber. Pikas usually have their den and nest sites below rock around 0.2–1 m in diameter, but often sit on larger and more prominent rocks. They generally reside in scree near or above the tree line. Pikas are restricted to cool, moist microhabitats on high peaks or watercourses. Intolerant of high diurnal temperatures, in the northern portion of their range, they may be found near sea level, but in the south they are rare below 2,500 m (8,200 ft). Pikas rely on existing spaces in the talus for homes and do not dig burrows. However, they can enlarge their homes by digging. 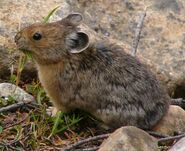 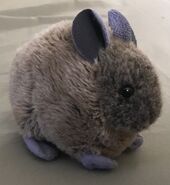 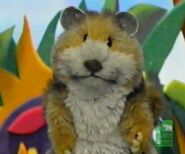