The Parody Wiki
Register
Don't have an account?
Sign In
Advertisement
in: Characters, Animals, North American Animals,
and 67 more

A huge bird with a massive wingspan, the American white pelican (Pelecanus erythrorhynchos) has a sturdy bill and expandable pouch that are so large that this bird has an almost comical appearance. The brilliant white plumage contrasts strongly with conspicuous black primary feathers, pale orange legs and feet, a pinkish bill, and a yellow patch around the eye. During the breeding season, yellow feathers develop on the head, chest and neck and the feet become bright orange-red. The bill turns bright orange and a large, flattened, vertical horn develops on the upper mandible. The male and female American white pelican are similar in appearance, but the juvenile is largely brownish with a dark crown and a pale grey bill. Extremely graceful in flight, the American white pelican flies in ‘V’ shaped or diagonal formations, alternating between gliding and flapping, with the head tucked back into the shoulders. It often makes use of thermals to lift its bulky frame to great heights, but in the absence of thermals, it flies into the wind, staying close to the water surface and using the uplift caused by wind rising off the waves. However, it is less elegant on land, with the short legs and webbed feet limiting movement to a clumsy waddle with the wings spread for balance. 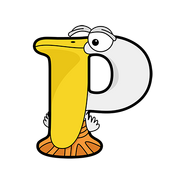 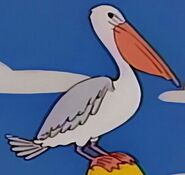