Start a Wiki
Amethyst is a character for Steven Universe.

One of the Gems manufactured on Earth as a part of the Gem Homeworld's Kindergarten project, Amethyst is one of the last surviving Gems on Earth who was born before the Crystal Gems rebelled against their Homeworld to stop their invasion of the planet. Having joined the Crystal Gems, Amethyst helped her friends protect the Earth over the next five millennia, for then later to aid in the shenanigans of Steven Universe, Rose Quartz's son. 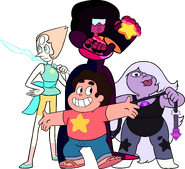 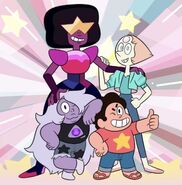 Add a photo to this gallery
Retrieved from "https://parody.fandom.com/wiki/Amethyst_(Steven_Universe)?oldid=1733206"
Community content is available under CC-BY-SA unless otherwise noted.