Ami is the animated counterpart of Ami Onuki. She is one of the members with Yumi Yoshimura and one of the two main protagonists of the series. She is voiced by Tara Strong.

Ami has apricot skin, hot pink eyes and short hot pink hair that goes down to her waist. She also partially ties her hair into buns. She also usually wears two flower hairclips. She has black mascara. She favors the pop music of the '60s and wears a light blue go-go dress with yellow flowers, a silver-and-emerald bracelet on her right wrist, an orange beaded bracelet on her left wrist, and white knee-high go-go boots with the zipper lying where her feet is located.

Ami is known for her girly-girl and goody-two-shoes personality. As the optimist, Ami always looks on the bright side of things and finds a solution to every situation she is involved in. She loves rainbows, bunnies (cute animals), sparkles and anything else typically pretty, which is the opposite of Yumi, who likes things more targeted to a tomboyish and unisex demographic. Ami is seen as a peppy and girly-girl female, but she is also capable of extreme rage when things don't go in her way.

Ami can play her drums with her bare feet, as seen in both "Ami Goes Bad" and "Mean Machine." Some episodes such as "Julie AmiYumi" shows that she is also capable of playing electric guitar like Yumi, who is main guitarlist of the band. Ami can crush a handheld gaming device with her hand as seen in "The Legend of Mei Pie". She is also a ninja like Yumi, though not as skillful as Yumi. Ami can also throw things far away as seen in "Gridiron Maidens", because of always pounding on the drums. She also swings her microphone to make it fly like a helicopter to get over big gaps. 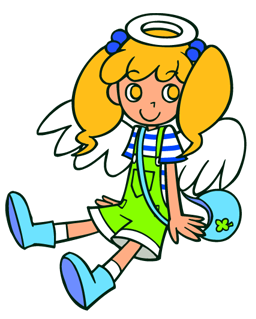