Amy (A Cool in the Lake from Rosemary Hills)

Amy is a character of the television show, Care Bears (DiC series). She appears in Rosemary Hills, making her debut in A Cool in the Lake.

Her appearance is known for a white shirt that bares her midriff (a seashell for a necklace), green hat, sunglasses, light blue skirt, and sandals. Her swimsuit appearance is a yellow bikini. 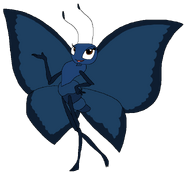