The Parody Wiki
Register
Don't have an account?
Sign In
Advertisement
in: Females, Living Books Characters, Characters,
and 80 more

Amanda Olivia "Amy" Fourpaws-Catsmith is the main deuteragonist, heroine and Harry D. Rabbit's main closest friend of Harry and the Haunted House and the TV series Harry and Friends.

She is a kind, sweet, friendly, cute, pretty and very brave freckled girl who appears to be the only kid not to tremble in anything and who has no fears. However, at the end, she is shocked when Harry loses his cap in the Haunted Mansion, and is once again reluctant to go back in. She is a very pretty, cute, friendly, kind and brave girl you can always count on as much as Harry does. Wearing her pink bow for good luck, Amy is a total-girly girl and the middle cousin of five girls who each came from her parents’ siblings.

Favorite Food: Spaghetti and meat balls with tomato sauce, sweets, pizza with extra cheese and pepperoni, fruit espeically apples, bananas, grapes, watermelon, oranges and strawberries, fast food especially fries with ketchup on hers and chicken strips with ketchup on hers, too.

National Pet Day Bottom Two Appearances: Once (with Mr. Conrad who placed 8th) She was spared and was never again in the bottom two after that

Trolls the Musical Role: Princess Poppy the main protagonist of the musical Trolls

Dislikes: When her friends argue and don't get along, rain (because it's too wet to go out and play), her aforementioned real first name Amanda, when friends get bored, when someone uses incorrect grammar

Favorite Singers: Billy Joel (because he's one of her friends and she shares a friendship with him as much as Harry does), Steve Perry (because he's one of her friends and favorite singer of Journey and she loves his necklace which he still wears for good luck as well), Backstreet Boys (especially Nick Carter) and Cyndi Lauper (who she met and befriended on her 8th birthday party surprise on her way home from the concert one morning and invited for her birthday party surprise)

Talent Show Acts: Ballet, "Put Your Little Foot, Right There" (by Kidsongs) with Harry, Olivia, Spot, Billy, Stinky, Sherrie, Earl and Steve, "Locomotion" (by Kylie Minogue) as a backup dancer and singer, "Girls Just Wanna Have Fun" with Cyndi, "Oh, Sherrie" with Steve, Spot, Earl and Harry, "We Are The World" with Harry and the others

Songs Sung In Get Up And Dance!

Songs Sung In We Can Do It! 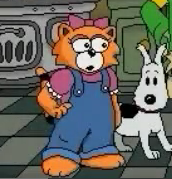 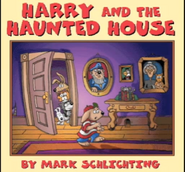 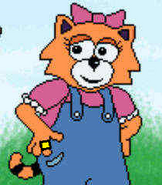