Anastasia is the main female and is the only member of the Romanov family to survive the assassination. She is played by Megan Ryan as a adult and Kristen Dunst as a child.

Anya has auburn hair in a ponytail and blue eyes. She wore a rag dress when she was a orphan. As a princess, she wears a gold dress with a blue sash and a silver crown.

Anastasia was a carefree, playful child before the Russian Revolution. At age 18, she is almost completely clueless of who she really is but she still tries to have fun while finding answers. She is witty when talking to Dimitri and often leaves him speechless.

Role in the film

Anastasia played Disgust in Inside Out (BugsandDaffyRockz Style)

She is an ant about to be the new queen

She played Nicholas St. North in Rise of the Princesses

She played Clara in Five Nights at Baloo's Series

She played Ly the Fairy in Manicman 2: The Great Escape

She played Marcella in Frosty's Great Adventure the Movie

She played the Necklace Man and Woman in Phinealaddin

She played Dexter's Mom in What a Cartoon (Ooglyeye Style)

She played Pearl Gesner in Home On The Range (I.R.Navarros Parody)

She played Flip in Friends Incorporated 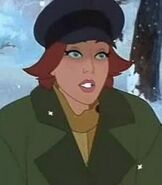 Sleeping with Pooka
Add a photo to this gallery
Retrieved from "https://parody.fandom.com/wiki/Anastasia?oldid=1654367"
Community content is available under CC-BY-SA unless otherwise noted.