The Andean mountain cat (Leopardus jacobita) is a small wild cat native to the high Andes that has been classified as Endangered by IUCN because fewer than 2,500 individuals are thought to exist in the wild.

It was first described by Emilio Cornalia who named it in honour of Jacobita Mantegazza. It is one of only two cat species for which no subspecies has been described. 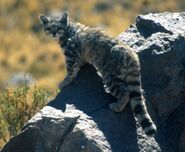 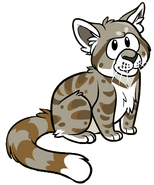