Start a Wiki
Andromon is a Digimon whose part of the Metal Empire and Virus Busters family. Despite his name, he's more of a cyborg-based digimon rather than android. An Andromon appeared in Digimon Adventure as one of the supporting characters, while one appeared in Digimon Tamers who turned back into a Guardromon and became partners with Kazu Shioda.

A human-type Cyborg Digimon. It has a combat capability that can knock down a Digimon below the Ultimate/Perfect level in a single hit. Andromon was developed as a prototype for Cyborg Digimon, and the mechanical-based Andromon and the organically-based cyborg Boltmon were manufactured at the same time. This technology was appropriate for MetalGreymon and Megadramon. As a prototype, this Digimon has neither will nor emotion, and is faithful to its programmed behavior. It was improved with a program based on the data obtained from the Andromon of File Island, and the strength of that program varies. Its special movement is a blade of energy that is activated from the module of its arm (Lightning Blade/Spiral Sword). 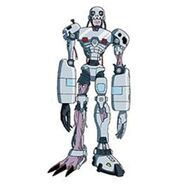 Retrieved from "https://parody.fandom.com/wiki/Andromon?oldid=1505747"
Community content is available under CC-BY-SA unless otherwise noted.