The Parody Wiki
Register
Don't have an account?
Sign In
Advertisement
in: Lilo and Stitch Characters, Pink Characters, Black Characters,
and 23 more

Angel, A.K.A. Experiment 624, is an illegal genetic experiment created by Jumba Jookiba, Stitch's love interest/female counterpart, and (from Stitch! onward) a major character in the Lilo & Stitch franchise. She is designed to turn people and experiments from good to evil. Programmed with a special musical neuro-linguistic behavioral modification trigger, she simply sings her song and, poof, they are evil. Luckily, the effects can be reversed by chanting the evil song backwards. She was captured by Gantu, but was rescued in "Snafu". After her rescue, she became an intergalactic singing sensation and Stitch's true love. Her demanding career requires her and Stitch to maintain a long-distance relationship.

She and Stitch are both appeared in Just Dance Unlimited, for the song Head & Heart

Outside of Lilo and Stitch series, she didn't befriended another characters as of this moment, as she prefers to live alone for now, however, she was still staying around California, as she wants to see her one true love and her puchiboo: Stitch, which he's currently living with The Bears in the cave. 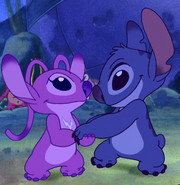 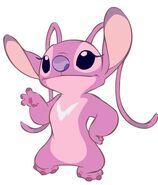