The Angolan colobus (Colobus angolensis), also called the Angolan black-and-white colobus or Angola colobus, is an arboreal Old World monkey belonging to the Colobus genus. Like all black-and-white colobi, the Angola colobus has black fur and a black face, surrounded by long, white locks of hair. It also has a mantle of white hair on the shoulders. The long, thin tail can be either black or white, but the tip is always white. There is a significant regional variation in the total amount of white on the body and the length of the fur. Animals that live in the mountains have longer, thicker fur than animals from the lowlands to protect them against the cold.The Angola colobus has a head-body length of 50 to 70 cm, with the males usually being larger than females. The tail is about 75 cm long, and the body weight varies between 9 and 20 kg. 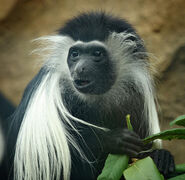