The Parody Wiki
Register
Don't have an account?
Sign In
Advertisement
in: Characters, Animals, African Animals,
and 8 more

The Angolan giraffe (Giraffa giraffa angolensis), also known as Namibian giraffe, is a subspecies of giraffe that is found in northern Namibia, south-western Zambia, Botswana, and western Zimbabwe. A 2009 genetic study on this subspecies suggests the northern Namib Desert and Etosha National Park populations each form a separate subspecies. However, genetic studies based on mitochondrial DNA do not support the division into two subspecies., but could identify giraffe in southern Zimbabwe as Angolan giraffe, suggestion a further eastward distribution than expected. This subspecies has large brown blotches with edges that are either somewhat notched or have angular extensions. The spotting pattern extends throughout the legs but not the upper part of the face. The neck and rump patches tend to be fairly small. The subspecies also has a white ear patch. Home range size of Angolan giraffes was found to be larger in unproductive areas such as the Namib Desert and much smaller in more productive areas such as Lake Manyara National Park. Approximately 13,000 animals are estimated to remain in the wild; and about 20 are kept in zoos. 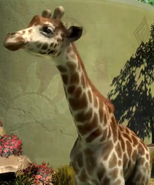 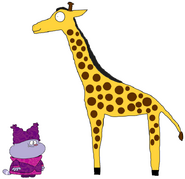