The Parody Wiki
Register
Don't have an account?
Sign In
Advertisement
in: Male Characters, Characters, Protagonists,
and 22 more

Animal is the wild drummer on The Muppet Show, performing with Dr. Teeth and the Electric Mayhem. Animal is a crazed percussionist with three styles of music -- loud, louder, and deafening. He speaks in a guttural shout, often repeating a few simple phrases, such as "BEAT DRUMS! BEAT DRUMS!" or "WO-MAN!" In relatively calmer moods, he is capable of more coherent conversation, but these instances are infrequent.

Animal first appeared in the 1975 pilot, The Muppet Show: Sex and Violence, chained up in a basement cell when he wasn't onstage performing with the Electric Mayhem. He later became a main character on The Muppet Show, and his unrestrained style has made him popular with young people for decades.

Frank Oz says that he had his character down to five words: Sex, sleep, food, drums and pain.[1] Occasionally, two of those essentials, food and drums, are interchangeable. In The Muppet Movie, Dr. Teeth had to remind Animal to beat, and not eat, his drums. In The Muppet Show episode 110, when asked by Kermit if he preferred drumming to food, Animal replied that drums are food.

Animal's wild attitude can be compared to Cookie Monster. In A Muppet Family Christmas, after observing Cookie Monster eating all of Janice's cookies in his signature manner, Animal comments, "That my kind of fella!"

Animal's family life is generally non-existent, and outside of the band, the Muppet Show troupe, and women in general, he has no other relationships. A significant exception is depicted in the book The Case of the Missing Mother, which reveals the existence of Animal's mother, LaVerne. LaVerne is also a drummer, and it's implied that percussion skills are a family trait.

It is a popular legend that Animal was inspired by Keith Moon, the wild drummer of the Who.[2][3] Mick Fleetwood of Fleetwood Mac is also sometimes cited as the inspiration for Animal.[4] However, there is no evidence in the original sketches for the character that suggest that he was based on anybody in particular.

Three of the other members of the Electric Mayhem were created by Muppet designer Michael K. Frith, and the sketches reproduced in the 1981 book Of Muppets and Men show that they were based on famous musicians. Dr. Teeth is a cross between Dr. John and Elton John; Sgt. Floyd Pepper is based on the Beatles' Sgt. Pepper album, and the original concept for Janice was a skinny, long-haired male character based on Mick Jagger. Animal, on the other hand, was designed by Jim Henson, and the rough sketch (also seen in Of Muppets and Men) doesn't appear to be related to any real musician.

However, it's not surprising that Animal is often compared with famous drummers -- as Buddy Rich said in his Muppet Show episode, "All drummers are animals." Animal himself considers Rich one of his musical influences, along with Gene Krupa, Keith Moon of The Who, and Ginger Baker of Cream and Blind Faith.[5] The actual drumming for Animal was performed by Ronnie Verrell, a veteran drummer and member of Jack Parnell's house band for The Muppet Show.

Animal has performed a number of solos on The Muppet Show, including "Sweet Tooth Jam", "Wild Thing", and "Foggy Day."

When drumming legend Buddy Rich appeared on The Muppet Show, one sequence featured a "drum battle" between Rich and Animal in homage to the legendary face-off album between Rich and his contemporary Gene Krupa.

One of Animal's most memorable performances with a guest star was in episode 105, in which he wildly played the drums in Rita Moreno's number "Fever". He started getting so out of hand, Rita was forced to give him a lengthy verbal reprimand in Spanish, ending with "Cool it!" Other guest stars who have had scenes with Animal include Lou Rawls, Leo Sayer, James Coburn, Harry Belafonte, and Kaye Ballard.

Animal has also had roles in all of the Muppet movies. In The Muppet Movie, he ate Dr. Bunsen Honeydew's Insta-Grow Pills, causing him to grow ten times his size and scare away Doc Hopper. He also appeared in The Great Muppet Caper, The Muppets Take Manhattan, The Muppet Christmas Carol, Muppet Treasure Island, Muppets from Space, It's a Very Merry Muppet Christmas Movie and The Muppets' Wizard of Oz.

In The Muppets, Animal is found in a Santa Barbara clinic for anger management, being sponsored by Jack Black. Animal has learned to stay calm (occasionally mumbling "IN CONTROL"), but goes wild when he hears the word "drums." Animal rejoins the Muppets but Jack Black encourages him to stay away from drums. It's only after a moment of psychomachia when Animal decides to play the drums again, during the Muppets' performance of "Rainbow Connection."

In Muppets Most Wanted, Animal was the first to notice that Kermit had been replaced by Constantine.

Animal is probably the most popular member of the Electric Mayhem. He has certainly been included in more merchandise than the rest of the band. He was also the only member of the band to be included regularly on Muppet Babies.

Animal was the mascot of the U.S. snowboarding team for the 1998 Winter Olympics in Nagano, Japan. Animal made a television appearance in Nagano with CBS reporter Kennedy, during which she stapled his feet to a snowboard. 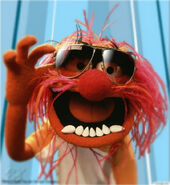 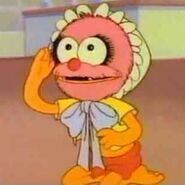 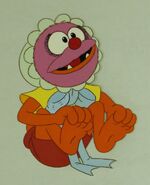 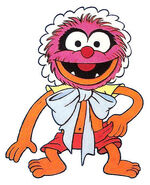 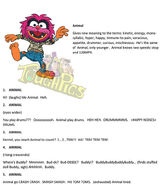 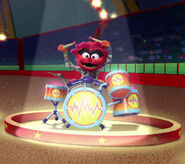