The Parody Wiki
Register
Don't have an account?
Sign In
Advertisement
in: American film actresses, Girls, Girls with a beautiful voice,
and 12 more

Anna M. Chlumsky (/ˈklʌmski/; born December 3, 1980) is an American actress. She began her career as a child actress, best known playing the lead role of Vada Sultenfuss in My Girl (1991) and its 1994 sequel. Between 1999 and 2005, Chlumsky's career entered a hiatus while she attended college. She returned to acting with roles in several independent films, including Blood Car(2007) and In the Loop (2009). Since 2012, Chlumsky has portrayed Amy Brookheimer on the HBO television series Veep, for which she has received five consecutive nominations for the Primetime Emmy Award for Outstanding Supporting Actress in a Comedy Series.

Chlumsky was born in Chicago, Illinois,[ the daughter of Nancy (née Zuncic), a singer, actress, and former flight attendant, and Frank Chlumsky Jr., a chef and saxophone player. She was raised in a Roman Catholic family. Chlumsky is of Czech and Croatian descent.

Chlumsky entered show business at an early age, modeling with her mother in an advertising campaign, though her roles in My Girl (1991) and My Girl 2 (1994) brought her fame. She also starred in Trading Mom (1994) alongside Sissy Spacek, as well as in Gold Diggers: The Secret of Bear Mountain with Christina Ricci. In the mid to late 1990s, she appeared or starred in several television films and series.

Chlumsky attended the University of Chicago, graduating in 2002 with a BA in International Studies. After graduation she worked as a fact-checker for the Zagat Survey and served as an editorial assistant for a HarperCollins science fiction-fantasy imprint. She found this work unsatisfying and decided to return to acting. She went to the Atlantic Acting School in Manhattan to receive formal training.[

Chlumsky appeared as Mary Calvin in a season 17 episode of Law & Order, first airing on January 12, 2007; and as Lisa Klein in a season 20 episode, first airing March 15, 2010. In March 2007, she appeared in the 30 Rock episode "The Fighting Irish" as Liz Lemler, a romantic rival of protagonist Liz Lemon, who receives flowers meant for Lemler. Chlumsky was in four episodes of the ABCdramedy Cupid in 2009. Later that year, she starred in the Lifetime Televisionmovie 12 Men of Christmas as Jan Lucas.

She starred in the Off Broadway production of Unconditional by Brett C. Leonard at The Public Theater, which opened on February 2008; it was produced by the LAByrinth Theater Company, She also starred in Lanford Wilson's Balm in Gileadin November 2005 at the American Theatre of Actors in New York City.

In 2009 she appeared in Armando Iannucci's BBC Films political satire In The Loop, co-starring with Peter Capaldi, Tom Hollander, Chris Addison, James Gandolfini, and Mimi Kennedy, a quasi-spinoff of Iannucci's BBC TV series The Thick of It. She plays Liza, a State Department assistant in the movie. From 2012, Chlumsky has played Amy Brookheimer, aide to Julia Louis-Dreyfus's character in HBO's Veep, also produced by Iannucci. In June 2012, she starred in the world premiere of David Adjmi's 3C at the Rattlestick Playwrights Theater in New York.

Dan Aykroyd, who played her father in the two My Girl films, has said that a script for a third film has been in development since 2003. In April 2012 Chlumsky "put to rest" any rumors that such a film was in development. In addition to her role on Veep, Chlumsky has appeared in multiple television series between 2011 and 2013, including White Collar, Law & Order: Special Victims Unit, and NBC's adaptation of Hannibal.

Chlumsky has appeared on Broadway in You Can't Take It with You, and beginning in April 2015 as editor Iris Peabody in the comedy Living on Love, with Renee Fleming, Jerry O'Connell and Douglas Sills.

In 2017, Chlumsky appeared in the fourth season of AMC Networks' Halt and Catch Fire as Dr. Katie Herman, the love interest of Gordon Clark (Scoot McNairy).

In October 2007, Chlumsky announced her engagement to Chinese-AmericanArmy Reserve member Shaun So; the two had met as students at the University of Chicago in 2000. So was deployed to Afghanistan from 2004 to 2006. They married on March 8, 2008, in Brooklyn, New York, and have two daughters.

In 2017 during an interview in RuPaul's "What's the Tee?" podcast, she stated that she has lived in Brazil and speaks fluent Brazilian Portuguese. 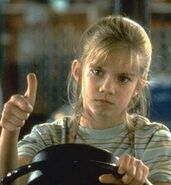 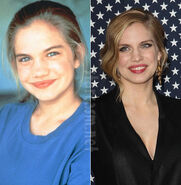