The Parody Wiki
Register
Don't have an account?
Sign In
Advertisement
in: Female Characters, Characters, Protagonists,
and 19 more

Annie Bennett-Warbucks is a main female protagonist of the Broadway musical, and the films of the same name.She is a spunky, energetic ten year old girl . She has curly red/orange hair (although she actually has straight auburn hair in the 1999 telefilm version, though it sometimes shown to be curly near the end). In the 2014 film, Annie had darker skin and her hair turned brown. Annie is friendly, good-natured, and usually positive. In the movie, she was stated to have been born on October 28, 1883 or 1919. She is also the love interest of Dean.

When Annie (not 2014) was born, her mother and her father died in a fire accident. She was then sent to the orphanage in New York City. Since then, she hoped her parents would come to get her someday. Annie has been miserable ever since her life in the orphanage, and the main reason is due to the orphanage's owner, Miss Hannigan, since Hannigan often forces Annie and the rest of the orphans to work. She also forces them to say, "I/We love you, Miss Hannigan." to her. Annie almost always maintains a good, positive attitude. She is very good-natured. She and the orphans are extremely innocent, which makes her a sweet girl. She has a fairly good relationship with the rest of the orphans, though sometimes she can have little tiffs with them. Annie might be optimistic and kind ' she is known for being the toughest orphan. She is very confident that her parents will return for her.

So Annie has the same story with Cosette and Cinderella but different personalities.

She played Marie in The AristoHumans (Live Action Style)

She played Olivia Flaversham in The Great Child Detective

She played Snow White in Annie White and the 7 Cousins

She is a woman

She Played Frances in ZOOM

She is a ZOOMer

She Played Baby Bop in Dennis The Menace Home Video

She is a Triceratops

She played Ducky in The Orphan Before Time

She is a swimmer

She played Robyn Starling in Oscar and Elmo: The Movie

She is Terk's past counterpart

He is a teacup and Mrs. Potts's son 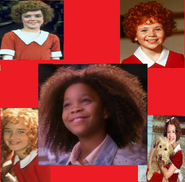 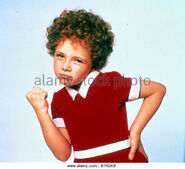 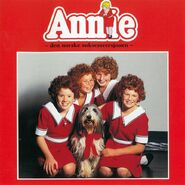 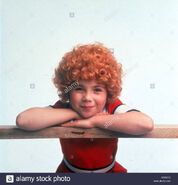 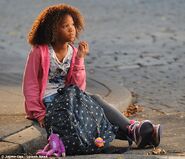 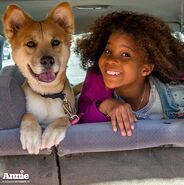