The Parody Wiki
Register
Don't have an account?
Sign In
Advertisement
in: Characters, Animals, Herbivores,
and 13 more

The antelope jackrabbit (Lepus alleni), found in Southern Arizona and Northwestern Mexico, is a species of North American hare. Within this range, it occupies dry desert areas. This species is placed in family Leporidae, which is within order Lagomorpha. Male and female antelope jackrabbits are identical in appearance. This species is large in size with long, pointed ears and a distinct coat coloration. The antelope jackrabbit has a white belly, light grey sides, a back peppered with black, and orange coloration on the neck and chest. It is similar to species like the black-tailed jackrabbit and white-sided jackrabbit. It is most active during twilight (crepuscular) and nocturnal, but can be active during the day when conditions are favorable (heavy cloud coverage). It feeds on cacti, mesquite leaves, and other vegetation. 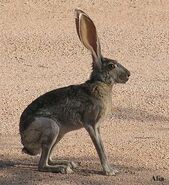