Daniel Anthony Padilla (born September 16, 1987), is an American YouTuber and comedian from Los Angeles, California, and a former member of Smosh. He is Ian's best friend and the founder of Smosh Productions. On June 14, 2017 Anthony officially announced he had left Smosh to become an independent content creator. 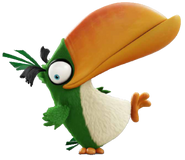 Bobby
Hedgehogs (2016)
Add a photo to this gallery

Retrieved from "https://parody.fandom.com/wiki/Anthony_Padilla?oldid=1956293"
Community content is available under CC-BY-SA unless otherwise noted.