The Parody Wiki
Register
Don't have an account?
Sign In
Advertisement
in: Characters, The Wiggles, Wiggly Topics,
and 41 more

Anthony Field is the blue Wiggle and the founding member of The Wiggles. Out of all The Wiggles, he's the only one who's stayed for all 25+ years they've been around. As such, the new generation wiggles  sometimes refer to Anthony as a 'wise senior Wiggle' and he often calls them 'young' in return.

Anthony is well known for being the Wiggle who's always hungry, and is also known for playing multiple instruments in the band such as the drums, trumpet, guitar, bagpipes, violin, tin whistle, kazoo and more recently; the banjo. The drums were Anthony's main instrument for a while but once the new generation came around, he became the main guitarist, but still plays the drums on occasion.

In 1992, when the Wiggles first got their skivvies, Anthony was the Green Wiggle, although his shirt in Here Comes a Song is either light blue or aqua. He wore a short sleeved shirt. He wore green possibly due to his Irish heritage. From 1996 onward, he became blue because Dorothy was already green.

He plays the guitar a lot now, instead of dancing but there are still songs like Do the Propeller!, Hot Potato, and Can You (Point Your Fingers And Do The Twist?) where he doesn't play the guitar nor any other instruments. 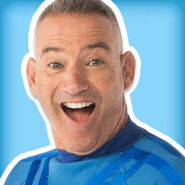