Anubis is the main antagonist in non-canonical Yu-Gi-Oh! The Movie: Pyramid of Light. In the novelization of the movie, he is revealed to be the co-creator of the Pyramid of Light alongside Aknadin. This Anubis is very different from the Anubis of Egyptian mythology; the latter of which was simply the Egyptian god of the dead and lacked an alignment to good or evil. 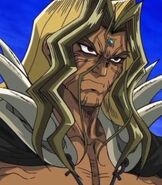 Add a photo to this gallery
Retrieved from "https://parody.fandom.com/wiki/Anubis?oldid=1372990"
Community content is available under CC-BY-SA unless otherwise noted.