The Parody Wiki
Register
Don't have an account?
Sign In
Advertisement
in: Characters, Cretaceous Animals, African Creatures,
and 16 more

Anubis or Inpu, Anpu in Ancient Egyptian (/əˈnjuːbɪs/;[1] Ancient Greek: Ἄνουβις, Egyptian: inpw, Coptic: ⲁⲛⲟⲩⲡ Anoup) is the Greek name of the god of death, mummification, embalming, the afterlife, cemeteries, tombs, and the Underworld, in ancient Egyptian religion, usually depicted as a canine or a man with a canine head. Archeologists have identified Anubis's sacred animal as an Egyptian canid, the African golden wolf. The African wolf was formerly called the "African golden jackal", until a 2015 genetic analysis updated the taxonomy and the common name for the species. As a result, Anubis is often referred to as having a "jackal" head, but this "jackal" is now more properly called a "wolf".

He plays Rama in The Meme Book 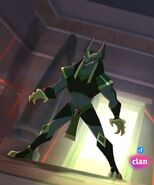 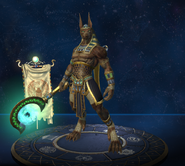 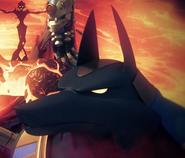