Aoi Futaba (葵 双葉 Aoi Futaba) is an officer who joined Bokuto Station in the first season. Originally assumed to be a woman, Aoi is in fact a male transvestite. Aoi had originally dressed as a woman to go undercover as a decoy to catch a serial rapist in the vice unit and, in the process, “went native.” Now, Aoi is more feminine in appearance and personality than any of the women in the station. In the second series, Aoi states on several occasions that "my body is male, but my heart is female". This sentiment is echoed and supported by Aoi's coworkers, who act and react as though she were any other woman. Aoi's romantic gender preferences are often speculated on by the Bokutou police, but in the end it is discovered that she prefers men. In one case, a very famous actor (Mr. Kitakoji) proposed to her not knowing she was transgendered, but was rejected (though Aoi was clearly attracted to him), and in fact this is the only time Aoi is seen wearing male clothing. In a second series episode, Aoi has become romantically involved with a man via the Internet, and is torn about meeting this man and revealing her secret. Before entering the force, Aoi was an accomplished basketball player who had many female admirers due to her ability to outsmart her opponent and score good shots from critical positions. One of them had even accepted Aoi's new identity as a female. In the 2nd season, Aoi's hair color was changed from brown to black. It was shown that Aoi had chosen to transition after undergoing a sting operation with her ex-superior Udamura Kumanosuke. 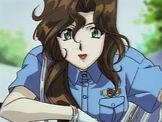 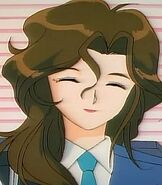 Add a photo to this gallery
Retrieved from "https://parody.fandom.com/wiki/Aoi_Futaba?oldid=1011774"
Community content is available under CC-BY-SA unless otherwise noted.