The Aoudad or Barbary sheep (Ammotragus lervia) has the distinction of being the only wild sheep species in Africa, and the only species in the genus Ammotragus. In appearance, it is somewhat of an intermediate between a sheep and a goat. It is a stocky, heavily built animal, with short legs and a rather long face. The coat, which is generally a sandy-brown colour, is woolly during the winter, but moults to a finer, sleek coat for the hot summer months. Both sexes have horns that sweep backwards and outwards in an arch; those of the male are much thicker, longer and more heavily ridged than the more slender horns of the female. Males also differ from females by their significantly heavier weight, (up to twice that of females), and the notably longer curtain of hair that hangs from the throat, chest and upper part of the forelegs. On males, this mane of long, soft hairs almost touches the ground. The short tail, which is hairless on the underside, has scent glands. 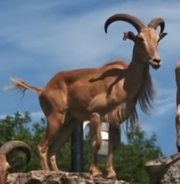