The Parody Wiki
Register
Don't have an account?
Sign In
Advertisement
in: Characters, Ponies, My Little Pony Characters,
and 24 more

Apple Bloom (born April 28, 2004) is a school-age Earth pony. A member of the Apple family, she is the younger sister of Applejack and Big McIntosh and the granddaughter of Granny Smith. Apple Bloom is one of the founding members of the Cutie Mark Crusaders, along with Sweetie Belle and Scootaloo. Apple Bloom was the only named school-age pony until Boast Busters and the only filly with a speaking role until Call of the Cutie. Like the other three Cutie Mark Crusaders, she lacks her cutie mark. She is called Apple Blossom in some other media and promotional material.

She played Riley Andersen in Inside Out (disneystyle172)

She played Suri in Mammoth (Dinosaur)

She is a lemur, Plio's daughter and Yar's granddaughter

She played Pac-Man in Apple Bloom and the Ghostly Adventures

She is a hungry pony

Apple Bloom played Inky in Trixie and the Ghostly Adventures

She is a secretary 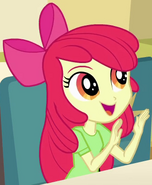 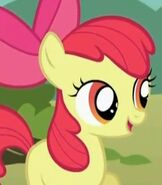