The Parody Wiki
Register
Don't have an account?
Sign In
Advertisement
in: Characters, Animals, European Animals,
and 48 more

Archaeopteryx is a genus of bird-like dinosaurs that is transitional between non-avian feathered dinosaurs and modern birds. Archaeopteryx lived in the Late Jurassic period around 150 million years ago, in what is now southern Germany during a time when Europe was an archipelago of islands in a shallow warm tropical sea, much closer to the equator than it is now. Similar in size to a Eurasian magpie, with the largest individuals possibly attaining the size of a raven, the largest species of Archaeopteryx could grow to about 0.5 m (1 ft 8 in) in length. Despite their small size, broad wings, and inferred ability to fly or glide, Archaeopteryx had more in common with other small Mesozoic dinosaurs than with modern birds. In particular, they shared the following features with the dromaeosaurids and troodontids: jaws with sharp teeth, three fingers with claws, a long bony tail, hyperextensible second toes ("killing claw"), feathers (which also suggest warm-bloodedness), and various features of the skeleton. 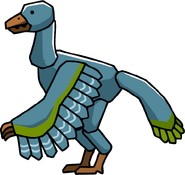 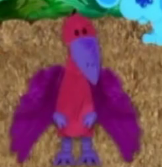